A couple of weeks ago, bedtimes for Little E were becoming unbearable. He would play up, stall for time and he even began throwing big tantrums at every step of the bedtime routine. Generally, he made everyone's life a misery and we all started to dread getting ready for bed. 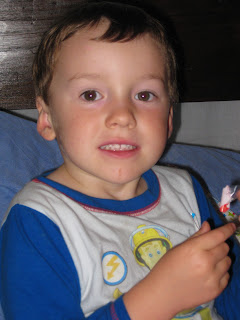 So, I resorted to bribery.
I promised him that if we had 10 really good bed times in a row, he could have a Toy Story DVD. Toy Story is his favourite film and he has coveted the DVD for months. I figured that for a four year old, ten consecutive good bed times was enough to be a challenge, but not too much for it to be too much hard work. I also told him that if he had one bad bed time, we would have to go back to the start and build up another ten nights.
The plan has worked like a dream (excuse the pun). Bedtimes have been a real pleasure for the last 9 nights. Every time he even hints at messing around, a small reminder about the DVD has nipped it in the bud and he's been compliant again.
I considered doing a sticker chart for him, but we didn't - partly because it seemed too formal and also because he doesn't seem to need a visual reminder, a verbal nudge has sufficed.
Even better, his behaviour during the day has been exemplary too. The other battleground - meal times - has also seen huge improvements. So, at the beginning of this week, I added a further incentive. Good behaviour during the day as well as at bedtime, would result in him getting the box-set (it was on offer and only £2 more expensive than getting just one).
If all goes to plan, and I think it will because he is incredibly focused on the prize, he will get his DVDs tomorrow.
I have always been a bit sceptical about bribery. I imagined a number of problems:
1) he would expect rewards for good behaviour, rather than good behaviour being the expected norm.
2) once he had attained the prize, he might revert to bad behaviour again
But, I figure that this exercise is teaching him a valuable lesson about working hard to get the results you want (in his case, he has to work hard to get the DVD). And, I have already warned him that if he starts messing around at bedtimes again, I will have to take the DVD away from him. Classic carrot and stick. 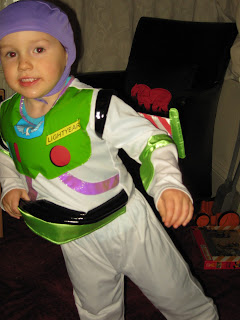 I have also tried to instil in him that you don't always get material goods in return for good behaviour, you also get less tangible benefits, such as a much happier mummy and daddy and the knowledge that you are teaching your little sister really important life lessons.
I'm hoping that I won't have to resort to bribery too often. I don't want it to become a habit. But I think it's been useful in the context of resolving a particular issue.
And, much as I really enjoy good behaviour, I think it is healthy for children to overstep boundaries and misbehave every now and then, so they understand where and what the boundaries are and that actions have consequences. Also, I don't want an overly compliant child. Little E is always eager to please and I hardly ever have to formally discipline him, but I want him to learn that in adulthood, sometimes success comes from challenging the norm - after all, without challenging the status quo, how on earth can you innovate and improve?
I'd be interested to hear others' experiences of discipline and the use of bribery.