I've wanted to go on a family camping trip for years. Through my pre-children, rose-tinted spectacles, I imagined a wholesome, ging gang goolie, sunshine-filled event, full of laughter and happy memories. And then, after E was born, I imagined bug infested, sodden affairs and decided to wait until the children were a bit older.

However, after W was born last year, and having heard positive stories from friends with small children, I decided it was time to live the dream (the happy version anyway!).

So, I put in my order before my birthday for a big, family-sized tent as our tiny, pre-children, 2-man tent would by no means make for 5 happy campers. We then visited Go Outdoors and came away with an 8-Man Hi Gear Kalihari tent. 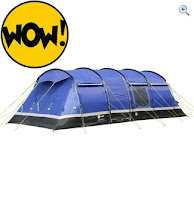 As an insurance policy, we decided to do our first camping trip with friends who have already camped with their small children. That way, I knew that if we forgot anything of vital importance, they would probably have remembered it.

We also chose a camp site with plenty of facilities. Stowford Farm Meadows in North Devon fitted the bill perfectly. Plus, it was close enough to home to ensure that if everything went horrifically wrong, we would only have an hour and a half drive to get to the safety of home.

Bearing in mind I'd not even done a practice run with the tent, it was actually really easy to put up and I managed it without swearing (at all!).

Best of all, I managed to get the tent back down and in its bag without even breaking into a sweat. And it went in the bag first time. The key to my success? Probably that I took it nice and slowly. The good weather probably helped too.

Stowford Farm Meadows was an excellent choice for a campsite. It was clean, there was plenty of room between pitches and there was plenty to suit everyone including an indoor swimming pool, soft play in the bar, a restaurant and a fish and chip shop. In fact, it was the fish and chip shop that saved my bacon on the first night. In my packing wisdom, I'd put the camping stove in my husband's car, which meant I couldn't fix up the dinner until he arrived from work, which was very late. So we opted for a takeaway on the first night, which probably eased any potential frayed tempers given that it was well past the children's bedtime. 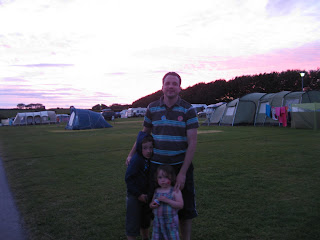 As well as the on-site activities, including a reptile show on the Saturday morning, there is plenty to see and do in nearby Combe Martin. We visited the Dinosaur and Wildlife Park and spent all day admiring the lions, seals, otters, alpacas, penguins and other livestock as well as pretending to be frightened by the model dinosaurs. Perhaps the best part of the park is the little train, which takes you to a mining village 100 years ago to relive a very wet earthquake. 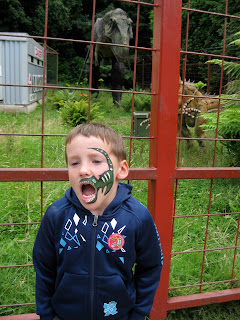 My top tips for a camping trip with children:
1. Chill out and relax. I switched off my phone and didn't look at a watch or a clock for three days and I  felt completely liberated. The children went to bed when they were tired, not because it was 'bedtime'.
2. Take a dustpan and brush - it was the one thing we remembered that our friends forgot and because it was so dry when we put the tent down, it means we didn't have to air it and shake it out when we got home.
3. Invest in an electricity power point cable. The type that connects up to the mains points on each pitch. We didn't buy one on this trip, but it's the next thing we're going to buy. It means we will be able take a little fridge with us to keep the milk and cheese cold. 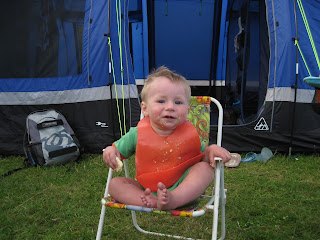 I can definitely say our first 'family' camping trip was a complete success. My oldest son said he wished we could live on a campsite and my daughter said she wanted to go camping again tomorrow.

Our next trip is to a Youth Hostel in the Cotswolds. I'll update you on that next week. After that, we're off on another camping trip to France. But this time, the tent will already be up for us and it will have all the mod cons.