When someone dies, it can be hard to know what to say to the grief-stricken friends and relatives.

Last week, the father of a family friend died. Although he was elderly, his death was sudden and came as something of a shock.

I had only met the father a couple of times, but the family friend is well-known in the local community.

I bought a sympathy card and while I was mulling over what I should write - the common complaint that "I just didn't know what to say"at the forefront of my mind - my six year old son wandered over and asked what I was doing.

I explained that our friend's father had died and that I was writing a card to let him know that we were thinking of him.

My son then asked if he could also write a note. So, after painstakingly writing something myself. A message composed after nearly an hour's thought. Something I hoped would provide comfort. I passed my son the pen.

Without hesitating to think about what he would write, my son wrote two sentences that summed up exactly what a condolence message should be. He wrote:

"It is sad that yore (sic) dad's died. I hope he will have a nice time in heaven."

It struck me, as I read his message, that sometimes we agonise too much about what to say and what not to say when tragedy hits. And often our agonising turns into paralysis. And we end up alienating our friends through fear of saying the wrong thing when they need our support the most.

In my son's short note he acknowledged the grief our friend feels and offered a glimmer of hope. Our friend is a very spiritual man and the message about heaven will offer him comfort and positivity.

After reading my son's message, I felt humbled. Here is a six year old, whose simplistic and honest view of life and death put the clumsy words I had spent ages constructing into sharp contrast. In his two sentences he had very easily expressed everything I had tried to say in my very rambling paragraph.

So why is it, that sometimes, in difficult situations, children find the right words when grown ups struggle to convey what they mean.

Perhaps we should all stop struggling about what to say and worrying about ambiguity. We should revisit the innocence of children and state the truth. At least that way we'll be there for our friends no matter how difficult the circumstances.

Above all, instead of agonising over what we should say, we should take the time just to listen to those who need us. 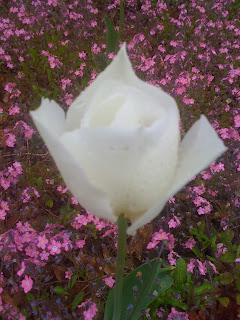