A trip to Minehead

Last weekend, we visited Minehead for our annual weekend away with my sisters, nieces, nephews and mum. This year, with the addition of Baby O, we numbered four adults and eight children!

Minehead, to many, is synonymous with Butlin's. Indeed the site dominates one end of the town centre and promenade. But there is more to the town than its famous holiday park and we stayed just outside the town in the Minehead Youth Hostel. It's a tradition that we always stay in a Youth Hostel for our annual weekend away. 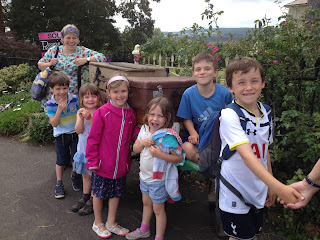 We aimed to meet late morning and my sister inkspotsandgrassstains had found a soft play centre based in Minehead Baptist Church's youth and family centre, the Hub, that sounded ideal. In fact, we were all a bit later than late morning. We had been held up by traffic for Dunster Show, which was taking place just outside Minehead. And my sister - well, she had to travel a bit further than us. So meeting in a soft play place was a great solution as it meant the children were having fun and not bored at waiting for everyone else. The only problem was the soft play only served snacks and we were all hungry for lunch - but we made do with crisps, cake and chocolate!

Once we had all had a good cup of tea and the children had worked off a bit of steam after the journey, we decided to head into the town to have a look around and to find the beach, before going up to check into the hostel.

Minehead Youth Hostel is probably the most family-friendly I've stayed in. The staff were warm and friendly and the request for everyone to remove their shoes before coming in actually made the hostel feel more like a home than holiday accommodation. I was even more impressed that, unlike most youth hostels, this one even had a bath, which makes cleaning children up after a busy day a lot easier!

Saturday was our full day. With several train fanatics in our party, we decided to catch a steam train on the West Somerset Railway - England's longest heritage rail line, to pretty harbour town of Watchet and then back to Dunster to visit the castle and Medieval village. 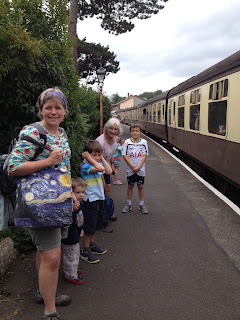 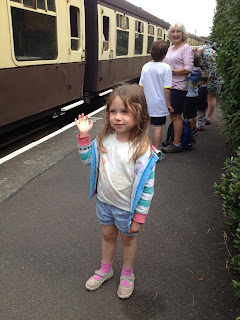 We wandered round a small market in Watchet before getting the train to Dunster where we took a somewhat scenic walk (alright - we got lost and took the wrong footpath) to the town and up the hill to the castle, which is owned by the National Trust.


The children really enjoyed the dressing up room and outside they were able to play with hula hoops and other outdoor games. I was a little relieved that the archery was finished by the time we'd finished walking round the interior of the castle.

On Sunday, we opted to travel in the opposite direction and visit Lynton and Lynmouth, where the older boys, 7 year old E and my 8 year old nephew D, were fascinated to learn about the tragic floods of 1952 in the Lynmouth Flood Memorial Hall. We then travelled up the cliff railway to the neighbouring village of Lynton where we had lunch. One of my sisters then had to travel back up north, but the remaining Devon contingent decided to travel on to visit Porlock Weir. The two older boys were keen to see more of the hills described in the account of when, in 1899, the lifeboatmen of Lynmouth had pushed the lifeboat up 1000 feet on the 14 mile journey to Porlock Weir to come to the rescue of the 1900 ton cargo ship, the Forest Hill. The weather was too stormy for the lifeboat to be launched from Lynmouth. The journey over Countisbury Hill was stunning and the ice-cream we enjoyed in Porlock Weir was a delicious end to a lovely weekend.

Even better, was the scenery as we drove over Exmoor on our journey home. The heather and gorse were in full bloom and the hues of purple and yellow were simply amazing. Sometimes, a trip fairly close to home can be a reminder to enjoy what we have. I definitely plan to return and explore the North Devon and West Somerset border a bit more. And I'm very tempted to do that bit of the South West Coast Path. And maybe next time I'll try and make sure I take a camera with room to take a few more pictures.

Now to decide where we should stay next year. Any suggestions?