Tomorrow is 18th October and it would have been my grandmother's birthday. She died nine years ago after suffering with Parkinson's Disease and Osteoporosis.

In her memory, I will be taking part in the Exeter Great West Run half marathon and raising funds for Parkinson's UK. 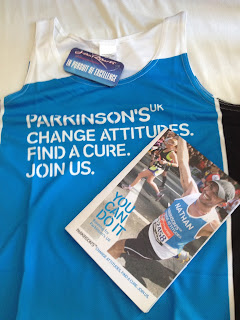 Parkinson's UK supports those affected by Parkinson's and funds research to find a cure for the condition. Around one in every 500 people in the UK has Parkinson's. It is a progressive neurological condition that affects sufferer's movements.

I've not trained for the event as much as I would have liked. Having four young children, including a six month old who likes to feed a lot, has put paid to my ambitions on that front. But I'm still pretty confident I'll get round the course.

A couple of weeks ago I ran more than 11 miles (although the MayMyRun app says 13.8 miles) in just under two hours and I was pretty comfortable at the end.

If you'd like to sponsor me, you can donate via my JustGiving page.

And if you're in Exeter tomorrow morning, look out for race number 2381 and give me a cheer. I think I'll need all the support I can get! 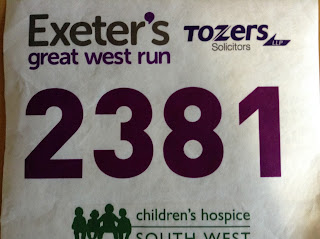