Little W is three years old now. Like other children of his age, he loves running and jumping and learning new skills like rolling, spinning and hopping. But soft play is becoming a bit old hat and it was time to find something new.

His older siblings are involved in lots of after school activities like dance, football and swimming. So after Christmas I decided to look around for something that he could do.

I thought about signing him up for football, like his big brother because he loves kicking a ball around. But I wanted to start him on something different. Something that he could do at his own pace and in his own time without running the risk of comparing him with his bigger brother and sister.

We opted for gymnastics because he's always been quite a climber. He loves to take risks, but he's also very calculating and will only do something daring once he's figured out that he's likely to succeed.

Soft play is one of his favourite activities and I figured that gymnastics in a dedicated facility with lots of soft, bouncy surfaces and more sophisticated equipment would be an ideal step up from the two local soft play centres we usually frequent.

I did a quick internet search and was impressed by the Newton Abbot Somersaults Gymnastics Club, particularly as they were pretty successful in the recent local sports awards.

So why is gymnastics an ideal next step from soft play?

Well, in soft play, our children are developing skills like balance and co-ordination, while letting off steam in a safe environment (even when it's raining outside). Gymnastics takes this a step further by encouraging youngsters to flex their motor skills further by using apparatus such as beams and trampolines. The sessions also help children with other skills like identifying colours and responding to verbal instructions.

We have started with the parent and toddler sessions at Newton Abbot. Each class starts with either an activity where children are asked to run or walk backwards or hop to a specific coloured hoop or to collect a certain coloured bean bag. Next everyone gathers around to warm up through a dance to music. Afterwards, is W's favourite bit where the children follow a circuit around set apparatus, balancing along beams, bouncing on a bouncy castle track and sliding down a slide. After a few goes round, the children are free to choose any apparatus they like in the whole gymnasium. Many love to bounce on the trampolines or try the miniature exercise bike or step machine. At the end, everyone gathers around to warm down to the hokey kokey. This morning's session also involved a parachute game. 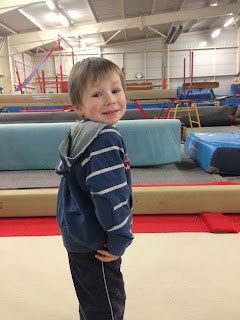 W absolutely loves it. Although he is quite reserved by nature, and tends to hold back in the group activities, he talks about it all week and he has a big grin from the moment he wakes up on a gymnastics morning. And in the individual circuit and choosing activities, he really blossoms and you can see his confidence growing by the minute.

It's not just that he adores the activity. But I also think he's proud to have something he does that's individual to him, which I think is important in a larger family. It's part of developing his own sense of identity and place in the family.

Of course, we still enjoy trips to the soft play - especially now that baby O is now on the move! But gymnastics is definitely the next step in developing W's motor skills and confidence.

What activities do you do with your pre-school children?
at January 28, 2016