I wasn't planning on doing another charity run for a while, having already done the Great West Run for Parkinson's and the Rock Solid 15K for Exeter Leukaemia Fund (ELF) in the last six months, but when the rugby girls suggested doing the first ever Teignmouth Colour Rush for Rowcroft Hospice, I jumped at the opportunity. 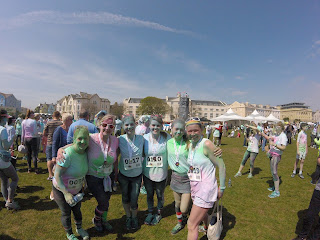 Would I do it again? Without hesitation yes. And would I recommend it to anyone else? Definitely, especially if you've never taken part in a charity run before because it's not really a run at all - you can take it as easy as you like. It's off road, so there's no pressure to be finished in a certain time because the road needs to open again, so you can take as long as you like and really soak up the wonderful, friendly atmosphere.

If you've been inspired to support the work of Rowcroft Hospice, I'd be very grateful for any donations made through my JustGiving page.