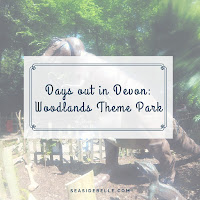 If you're looking for a family day out in South Devon on a sunny (yes! it was sunny) bank holiday weekend, look no further than Woodlands Theme Park in Devon.

With water rides, to help you keep cool, slides, outdoor play areas, shady woodlands, plenty of picnic benches and a lake, there really is plenty to keep everyone occupied.

Have a look at my film of our day and read on to find out more about what we got up to:
We set off early in a bid to get there before the crowds, which would have been great apart from a small navigating error that meant we ended up on the Higher Dart ferry. Although it was an unexpected £5.60 expense, it was something we'd never done before and great fun to watch the boats as we crossed the water.

After that, it was plain sailing (terrible pun), and we arrived in the car park not long after the gates had opened and there was still barely a queue to get in. We quickly found our friends, who are down on holiday.

In fact, we were very impressed with how short the queues were all day. I'm not sure if this is because people had steered away from the park thinking it would be busy on a hot bank holiday weekend or if we were just lucky.

We started on the pirate ship ride, just after the entrance. Elliot was slightly concerned that he might see his breakfast again, as it hadn't been long since we had stopped for a cheeky Maccy D's sausage and egg McMuffin, but he soon recovered as we wandered up to the farmyard area and met goats, chickens, tarantulas, reptiles, rabbits and even meerkats (not in the same enclosure obviously).

It was time for a more sedate ride, so we clambered aboard the tractor ride. It took a while for Beatrix to get the hang of using an accelerator, but we eventually got round, with the typical holiday traffic jam of other tractors behind us.

From there, we headed down towards the boating lake where we all managed to get a ride, thanks to some clever queuing and swapping grown ups so each of the children could have a turn.

A toilet stop was now required and we found ourselves in a huge indoor soft play area with the really tall trauma tower. The best view of the riders is from the first floor balcony, as this is where you catch the riders expressions at the top before they drop back down again. As well as the Trauma Tower, there are a couple of more traditional fairground rides suitable for smaller children including a small wheel. And then there's the soft play - always a winner in our house - with plenty of slides and a couple of drop slides. Beatrix plucked up the courage to have a go and absolutely loved it. For a five year old, she's a real thrill seeker!

By this time, some tummies were rumbling again so we went back outside into the glorious sunshine and started off down the hill towards the water slides, stopping on the way for a picnic on some benches, conveniently placed in front of a coffee stall.

The water slides are probably the biggest draw to Woodlands, especially on a baking hot summer day. However, we didn't have to queue for long before going on each of the flumes. There is a choice of three and in each, two riders go hurtling down a water slide or a chute in a boat. The orange one is pretty dry, but you're guaranteed to get wet on the purple one.

While they were waiting for an appropriate grown up to accompany them down the slide, the rest of the children played in the playground at the bottom of the hill.

Once we'd all had a go on all the slides we had a go on the next ride: the toboggan run. The best thing about this is that you are in control of how fast you go. I rode with Elliot, who was a bit concerned about all the signs asking riders to check their brakes and to slow down on the corners. But we rode pretty fast and nearly caught up with the rider in front.

Having exhausted the action and water rides, we opted for a sedate walk through the forest and the latest attraction, the Dino Trek. At the moment, Woodlands have question sheets for children, based on the dinosaur exhibit. You can hand the completed sheets in for the chance to win prizes in a competition (which ends in early June 2016). Both the boys are dino mad, so really enjoyed the chance to get up close with the exhibits.

We ended up in another outdoor play area with a massive sandpit where we stopped for a few minutes before carrying on towards the pedal boats. After a couple of relaxing trips around the island on the lake, we decided to start off back up the hill to find ice cream. En route we stopped at another big outdoor play area with huge slides and walkways through the trees and at the top of the hill we found an ice cream stand and another couple of huge slides. One was most definitely for adults, an almost vertical drop on a water slide. Next door was one suitable for children, with small sleighs used to hurtle down what looked like a dry ski slope, sprinkled with water. For the younger children, a roundabout with swings helped with the waiting.

By this time, the day was over and the park was starting to shut, so we had to call it a day.

Last year, we camped at Woodlands and had two glorious days to explore the whole park. And now, I've had to promise that we'll return later in the summer with our tent so we can do it again.

We hadn't made it around all the attractions, but we'd done enough. Well, certainly enough that 3 year old Wilf was asleep in the car after about 5 minutes. He didn't wake up until 4am the next morning!

Have you been to Woodlands? What was your favourite ride? What other days out in Devon would you recommend?
at May 31, 2016

Email ThisBlogThis!Share to TwitterShare to FacebookShare to Pinterest
Labels: days out, days out in Devon, Devon, theme park, Woodlands