For his 9th birthday, Elliot wanted to go out for his favourite food: pizza.

This was the perfect excuse for me us to try Ode&Co "true pizza", which opened earlier this summer at the nearby Coast View Holiday Park.

Ode&Co delivers on all those fronts. It opened earlier this summer as the latest offering by Tim Bouget, who runs the award-winning Ode Fine Dining in Shaldon and Cafe Ode. 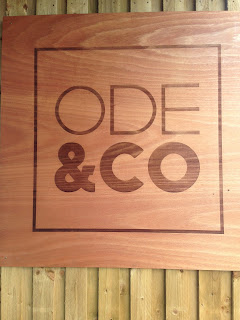 The first thing that struck us when we walked into Ode&Co was the stunning view over Lyme Bay. We took a seat by the window as, despite the sun in the picture, we had arrived in a rain shower and more were forecast. 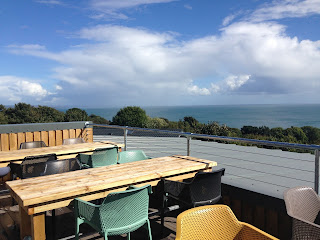 To take full advantage of the uninterrupted view of the sky, the outside balcony features a telescope for star-gazing at night. So obviously we'll have to return for tea in the winter to try it out! 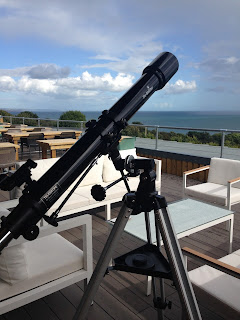 The pizzas are made on a sour dough base and cooked in a wood fired oven and the menu takes full advantage of the variety of local produce available to offer something different that your regular Hawaiian and Margerita offering. Which, caused a slight problem when Elliot looked through it and panicked that he couldn't see his favourite sort of pizza: pepperoni. Luckily, because everything is cooked to order and the staff are so accommodating, they were happy to turn the 'Sharpham Brie, Shaldon Figs and Dorset Salami' into a plain Salami pizza, which went down very well indeed. 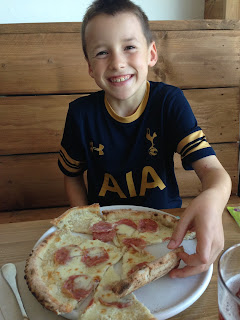 I had the same, but with all the toppings and Mr SeasideBelle had the 'Day Boat White Fish Calzone with Dill, Red Chilli and Black Pepper'. He said that it was the first time he'd had fish on a pizza, but that it was really tasty and that the slight kick of the chilli gave it a good edge.

You can actually see the pizzas being cooked in the open kitchen and I had told Elliot that it only takes 40 seconds to heat the pizzas in the wood fired oven. Of course, he had to test my theory out and apparently, it actually takes 43 seconds. 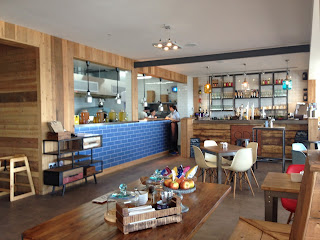 To top the pizzas, Ode&Co serves a wide range of oils, and I added a gentle chilli oil, which really contrasted with the sweetness of the figs.

We also ordered a couple of starters, including a wood-fired venison chorizo with honey glaze and a tomato, mozzarella and torn basil salad.

Ode&Co has a very well stocked bar and as Mr SeasideBelle was driving I had a blush cider while he had an organic cola and the children enjoyed apple juice.

Because I mentioned that it was Elliot's birthday when I booked, we were invited to bring a cake if we wanted and the staff were happy to light a candle and bring the cake over with a knife and some plates and join us as we sang Happy Birthday, a really lovely added touch.

Another added touch that made us feel really welcome, despite being a party with 5 children aged 17 months to 9 years was the basket of books for the children to look at while we waited to order our food and eat.

To find an amazing pizza restaurant, with good quality ingredients, a stunning view and such relaxing surroundings so close to home just brings it home to me how lucky we are to live in this neck of the woods. 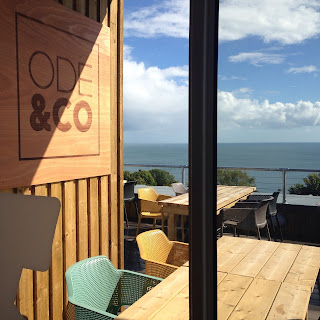 If you're ever in South Devon, I definitely recommend you pay a visit. You might also want to try CafeOde in Shaldon, which is next on our list to visit.
at September 26, 2016