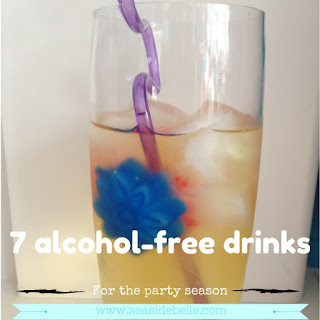 This year will be one of the first Christmas periods is a long time where I'll be able to have a few drinks. But even though I'm entering the Christmas party season without being pregnant, life with four young children, two of which are still nursing, means that while I'm excited about being able to have a couple of glasses of the strong stuff, I'm still not keen on nursing a hangover.

Not drinking at Christmas parties doesn't have to be boring though. And, having spent several years struggling with sickly sweet kids drinks, I've discovered a few adult alternatives for anyone having a dry Christmas.

Here are seven of my favourite non-alcoholic party drinks for grown-ups:

What are your favourite alcohol-free party drinks?
at November 21, 2016