A weekend of rejuvenation at the Flea Retreat

Do you ever wish that time would stand still just so you can catch up?

For me, the last few years have been a complete blur of just trying to keep on top of everything. Trying to do enough laundry to prevent the dirty clothes spilling out of the washing basket and not panic about whether the kids had clean school uniform on a Monday morning. Struggling to get a handle on everything on my to-do list. Dealing with the never-ending stream of washing-up.

A few months ago I decided I'd had enough. I kept wishing that life had a pause button so I could get everything done and get back on top of things instead of just fire-fighting all the time.

I needed a break. So I started looking for a weekend retreat. Somewhere quiet and away from it all. Somewhere I could push the reset button and start afresh.

I wasn't looking for a hippy, vegan, tantric yoga type thing that cost the earth. I just wanted a basic weekend to myself so I could refill my cup. And then I spotted the Flea Retreat for bloggers, which was organised by Sally Whittle of Who's The Mummy and Tots 100. Not just a weekend of navel-gazing out in the sticks, but somewhere I could take part in workshops, learn something new and just have a bit of time to myself. 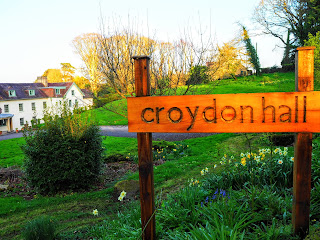 A couple of weeks before the event I had a nose at who else might be going. I wondered if I might know anyone. And I panicked. I recognised a lot of the big names in blogging. Award-winning bloggers. Professional bloggers. I'm just a hobbyist (for the moment - who knows what the future might hold). I started to worry that I'd be seen as a fraud. I was gripped by imposter syndrome. Why would any of these people want to talk to me? Would they wonder what the hell I was doing at their blogging retreat?

So it was with some trepidation that I drove up to Croydon Hall in Somerset for the weekend. Put at ease only because I knew one other person - fellow Devon Blogger Claire.

I needn't have worried at all. The weekend was all that I wanted and more. I tried yoga for the first time. Thanks Rachel for popping my yoga cherry!

I took part in creative writing workshops run by Kirstie Pelling from The Family Adventure Project where we were encouraged to stop and notice the minutiae of life, simply letting the words flow onto paper. I remembered the wise words my mother-in-law imparted on the morning of my wedding: "make sure you stop for a few moments to drink in the sights, sounds, smells and atmosphere of the day and commit them to memory because it will pass by in a blur". And that's what the creative writing sessions did; we stopped and noticed what was around us - the sights, sounds and smells of our surroundings. It really was a great way of stopping and allowing our creativity to flow.

I got to grips with my camera as I wandered around the stunning grounds of Croydon Hall during the Golden Hour photography session with Tom Arber. Stopping to notice flowers and really taking the time to experiment with the different settings on my camera - something I've never really had the opportunity to do before.

Here are a couple of the pictures I took. For some reason I was very drawn to the spring flowers! 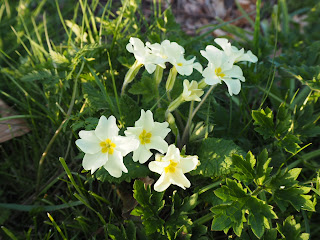 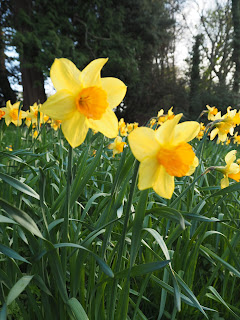 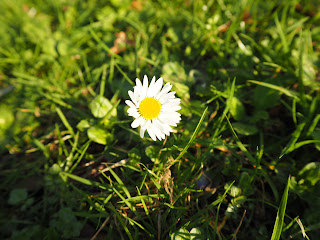 I learnt about gaining the confidence to really shine on film with Darren and Shaun from Aspire in probably the funniest session of the weekend. Although it was nerve-wracking to stand up and say a piece to the camera in front of everyone else in the workshop. But I've definitely grown in confidence I'm now tempted to revisit my YouTube Channel.

I tried paddle-boarding for the first time and had a really enjoyable kayak session in Porlock Weir with Exmoor Adventures as I got to grips with using a GoPro while trying to keep my balance on the water. Somehow I managed to escape falling in although there were a couple of close calls where I clung precariously to the paddle board. It did turn out to be a lot sunnier than this picture suggests! 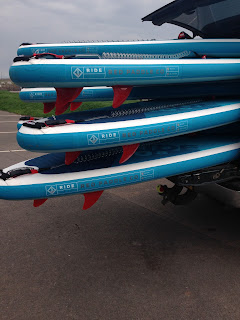 But best of all, I met some really inspiring people, who have had the courage and tenacity to grab hold of their dreams and make them a reality. They showed me that it's possible to overcome your fears and take life by the horns to be whoever you want to be. Stories were shared about overcoming crippling shyness, of being unafraid to ask for what you want - because if you don't ask, you don't get. There was a real sense of friendliness. It was a weekend of sharing knowledge. A time to simply enjoy each others' company and the stunning surroundings. We all gained an appetite to learn more - about yourself and others and to develop new skills. There was also a lot of laughter (especially after a few glasses of wine in the evening) and a huge feeling of mutual support.

The final session underlined this spirit of the weekend and we wrote positive words about our fellow blogging retreat friends. Here's what was said about me: cheerful; funny; hysterical. 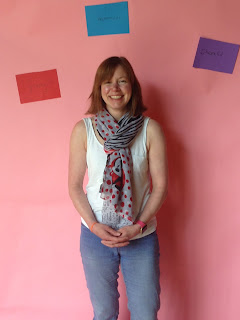 I was looking for a weekend of rejuvenation and that's what I got as well as the opportunity to learn and make new friends.

I've returned inspired, happier and more self-assured. And even though my week didn't start very well - the car broke down just as I was trying to get the kids to school - it hasn't affected my outlook or mood. I mean, at least it didn't break down on the way to the retreat or on my way to Elliot's cup final football match on Sunday afternoon. The spirit of the Flea Retreat just keeps on giving.

After spending many months struggling to see past the mountain of tasks in front of me and struggling with the massive curveball that ended my marriage, I'm feeling lighter, happier and more confident that I can make the most of whatever life throws at me. Instead of focusing on endings and on what might have been, I'm now focused on the future and fulfilling my potential, seeking new opportunities and embracing them so I really can be the best version of myself.

A massive thanks to Sally and the team for putting together the Flea Retreat and for all who attended for making me feel so welcome and inspired.

I really am very optimistic about the future now.
at April 24, 2018