Football and a walk in Mules Park, Teignmouth. 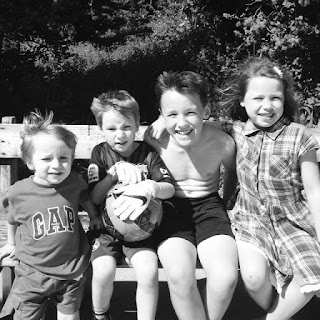 Yesterday, for the first time in a long time, Elliot wanted to go out.

For the past year or so, unless football has been involved, he's been reluctant to leave the house at all, preferring to play on the PlayStation or watch YouTube videos of other people playing on the PlayStation.

So I seized the opportunity and let him guide our excursion.

To be fair, football was still involved. He wanted to go out for a kick around. He said he'd rather play football than watch the World Cup Final on TV. So we headed out. Our usual kick around spot was busy - there was a big motorcycle meet there - so we headed up to Mules Park up on East Cliff.

We spent a while exploring the lower end of Mules Park, where the ponds have been restored, before emerging up the hill a bit, where we found a flat-ish area of grass to play football.

We set up a goal, using the buggy and a bag and enjoyed a kick around. Wilf, went in goal and Elliot and I went head to head. The game ended in a draw, so we went into extra time and eventually he beat me on penalties.

Normally, I would choose to sit out and watch. But because it has been so long since he has been enthused about getting out and about, I opted to get involved in the game and we both had great fun.

As we wandered back down towards the beach, we stopped at a bench to admire the view and I managed to get a half decent photo of all four of them, which will help me remember the afternoon. 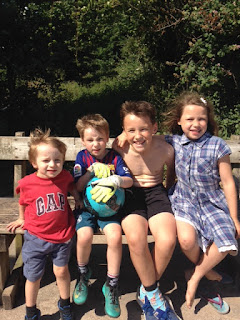 It just goes to prove that you don't have to spend a lot of money to go out and have fun.


Although, we did end the day with an ice cream stop at the East Cliff cafe. They do Mr Whippy with flakes and flavoured sauce and they also serve up some delicious scoop ice cream - Wilf, Ossie and Bea had the chocolate, which was delicious.
at July 16, 2018