My son loves going to the zoo.
We have annual membership of Paignton Zoo and Living Coasts (Torquay) and we make it well worth the money by going as often as we can.
So, when we discovered that they offer a party package, he decided that this was a perfect way to celebrate his sixth birthday.
We opted for Living Coasts because it is smaller, so I thought there was less chance of me losing a child. Plus, it is slightly cheaper, and it is closer to where we live. 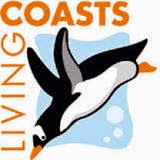 Getting information about the birthday parties was not particularly easy. I was sure I'd once seen a leaflet, but none were on display when we visited either zoo during the summer. However, I did an online search and found the basic details I needed and a booking form.
As time was getting short, I decided to take the booking form in person so I could pick up the invitations included in the party package rather than wait for them to be sent. Unfortunately, the staff at the gate were unable to help and I ended up having to ring up and book by phone. Nevertheless, the invitations arrived in the post two days later and I had already texted most of the parents to alert them that an invite would be imminent.
We decided that around 8-10 children would be enough to make a decent celebration without it getting too expensive. I would have preferred 8 but if you had 10 children, you got 2 free adult entries. However, I allowed Elliot to invite 10 children (bearing in mind I also had my son and daughter to pay for), in the expectation that a few children might not be able to make it. And so, with only one decline, we ended up with 11.
Luckily, a few parents decided to join us on the day, so I wasn't overwhelmed by too many children. However, they had to pay for themselves, which can be a bit awkward when you invite their child to a party but they have to pay extra to come too.
The Living Coasts party allows you to spend as much time as you like at the zoo with a party buffet served at 12.30. So you could either start early and finish up with the party food. Or you could come later and start with the buffet and spend the afternoon looking at the animals. We opted for an early start. Now, normally when we visit Living Coasts it takes us a good 2 hours to get round, which is what Living Coasts suggest is the time it takes to look at everything. So, we all met at 10.15, with a view to starting the party at 10.30. What I hadn't considered was that not all children have the same attention spans. We seemed to race through all the exhibits, despite being in time for the penguin feeding, and after an hour we were through, with still another 60 minutes until we were due to be served our party food. Someone suggested we just go up to the cafe and wait. But I decided to make them all go round again. And, after our second tour, we were bang on 12.30 and in time for our food.
The buffet was very good and included generous servings: jugs of squash, cheese or ham sandwiches, pizza, cheese and pineapple, sausages, carrots and dip, potato wedges and crisps. The service was brilliant too. And, while the children may not have appreciated the amazing views, the parents certainly did.
We finished up with party bags, which are provided with the package as an optional extra. I thought they were well worth the money. They contained a couple of toys from the Living Coasts shop and provided each child with a souvenir of the day.
In future, I would limit the numbers to between 6 and 8 children. I think it would be the perfect party for slightly older ones of around 8-10 years as they would appreciate the exhibits a bit more. A couple of my son's friends were more interested in whether there was a play area than looking at the animals.
However, my son had a fantastic time.
Once we were booked, Living Coasts were very helpful. I particularly appreciated the parking permit included in the package for the hosts. But it would have been helpful if more had been available to help parents. Maybe a discount for accompanying parents on their entry fee or a complimentary tea of coffee for the accompanying adults while the children enjoyed their party food.
I have a sneaking suspicion my son may be angling for an upgrade to a Paignton Zoo party next year. Thankfully, he hasn't yet clocked the 'Be A Keeper For A Day' leaflets yet!