When sleep deprivation sends you to the edge of insanity

Six years of chronic sleep deprivation has really hit me.

Three consecutive (and overlapping) non-sleeping children has impacted my ability to live a normal life and robbed me of my personality. It's left me questioning who I am and sent me to the edge of madness.

You expect a small baby to be up feeding several times a night. And I have, at times, loved the precious midnight hours as we've forged a deep connection - just us - as the rest of the family have slumbered. But when weeks turn into months and months turn into years, sleep deprivation can send you right to the edge. 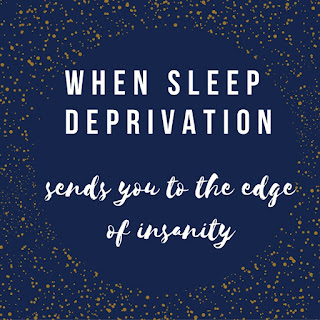 I realised things weren't quite right when I had to stop the car on the way to work because I could hear the baby crying and I panicked that I had forgotten to drop him at the childminder and was bringing him to work with me. Sometimes I would wake at night and hear crying, but when I went to the baby's cot he would still be asleep. I often heard an irritating, low buzzing noise that stopped me from getting back to sleep. Then there was the time when I was convinced I could see rats running along the side of the road. I probably wasn't really safe to drive, but you can't exactly call in sick every day because you're over-tired. So I carried on, telling myself it's just part of motherhood, you just have to suck it up.

I became short-tempered with the rest of the family. Little things would irritate me and I occasionally struggled with my temper. I struggled to be the mum I desperately wanted to be. It was an effort just to get everybody out the door for school and on my days off and at weekends, I struggled to leave the house. I stopped taking them to the park and it was a real effort to get out to any baby groups, days out or activities.

When the baby woke, yet again, in the night I would drag myself off to feed and if he wouldn't settle, I would sob to my husband that I couldn't do this anymore. On several occasions, I just wanted to wander out of the house in my pyjamas and wander down to the beach or up on to the cliffs to breathe in the fresh, cool night air and be free of the shackles of breastfeeding constantly through the night. Luckily, I never did. The fear of being locked up in a mental institute and depriving my baby of my milk was the only thing that stopped me.

I was completely overwhelmed by life, by all the stuff I had to do. I just wanted to curl up and sleep for a week, and for life to stop while I did so, because I didn't want the children to miss me and I didn't want to miss a day of them growing up.

It was at this point that I decided to get help. My emotions were swinging wildly and I had stopped socialising with friends. Invitations to occasional nights out, that I used to look forward to, were declined because I was just too tired and too miserable. I just felt so horrible.

So I saw the health visitor. I was frightened. My exhaustion was so bad that it was making me paranoid that if I admitted to how bad things really were, that social services might take my children from me. But they were lovely. I started getting weekly visits so I could talk about how I was feeling. How down I was about the dark place I was in. We talked about ways we could help the baby sleep and we put in place a very gentle sleep training system which was based on trying to ease him away from associating the boob with sleep. My husband was a massive help. He realised I was massively struggling and he took over the first night waking so I could get a bit more sleep.

The health visitor gave me a questionnaire and the score suggested I had postnatal depression. She suggested I visit the GP and consider taking anti-depressants. She also referred me to counselling. I declined the anti-depressants - I couldn't face the thought of taking drugs and having to wean myself off them. I didn't want to feel fake happiness - I wanted to feel real happiness. I was already tired of faking to everyone that everything was fine and I was coping brilliantly with four young children when in reality I was falling apart at the seams.

So I opted for the counselling. It was a disaster. At the first session, I was asked lots of questions about family life, money, work etc and started to think that I really shouldn't feel the way I did because financial issues, bereavement, work weren't an issue (except that I didn't feel like I was performing as well as I could at work because of the exhaustion). She then gave me a sleep diary and a book on insomnia.

I didn't need a book on insomnia or the relaxation CD to help me get to sleep. I didn't have a problem getting to sleep and it wasn't my issue that was waking me up several times a night. It was absolutely no help for someone who was having to wake up all the time to deal with a non-sleeping baby.

At the second session, I told the counsellor that the sleep information she had given me was completely useless. There was nothing else she could do, so we stopped the sessions.

And then a miracle happened. Yesterday, I woke up for the first time in six years feeling refreshed. It was as though I had been having trouble with my eyesight and put on a pair of glasses and could see clearly again. I had gone to bed a 9pm and when I opened my eyes to look at the clock it said 5.45am. All was quiet in the house. I had woken naturally and baby was still asleep! He woke 20 minutes later having had 10 hours of solid sleep. I felt wonderful. I felt human. I felt alive for the first time in over half a decade! I relished every minute of the day, knowing it would never last. It would be a one-off.

But then, today, I woke up at 7am after another full night of sleep.

There is light at the end of the tunnel. I'm on the road to find the real me again. I can start planning life again. I feel like I can look forward.

I hadn't expected this to happen so soon. It took Bea four and a half years to manage a full night of sleep. I'm delighted. I just hope it lasts!

The last six years have taught me a few things. Mainly, that while lots of mums get help and understanding in the early days, it's when the child is older and still not sleeping that they really need the help. I was OK in the early days, adrenaline and hormones pushed me through. It was as my children got older and still didn't sleep that I could have done with some help. Practical things like taking the children out to the park so I could sleep or maybe dropping round a dinner to heat up in the oven would have been very much appreciated. I didn't ask. I was too proud and too embarrassed. But if you every see a mum who is really struggling with sleep. Don't just sympathise or, even worse, talk about when your child slept through the night! Offer some practical support and a friendly, non-judgemental listening ear.

And if you are struggling with chronic sleep deprivation, there is light at the end of the tunnel. You're not going mad and you're not losing the plot. You might just need a good night of sleep. Hang in there! And don't be afraid or too proud to ask for help.

If this really is the start of some proper sleeping through, I think I might actually miss our night feeds. How mad is that?