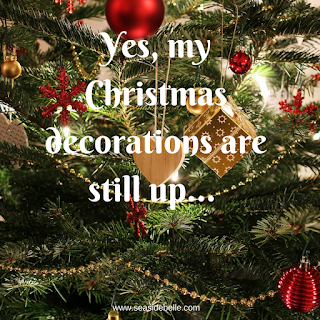 Stop with all the new year austerity!

It's January 2nd and my Christmas decorations are still up.

Yes - that's right. In the SeasideBelle household, Christmas keeps on going until 6th January aka the Feast of the Epiphany.

Why pack everything up as the new year dawns (or even as early as Boxing Day) when the season of Christmas lasts so much longer?

There's so much hype in the run up to the big day, it seems a real shame to suddenly bring it to a premature end.

So I'm standing up for making the season of goodwill last the full 12 days of Christmas.

Imagine what those three kings/wise men/magi would have thought if they'd travelled all that way from the East following the star to find the stable empty because Mary and Joseph had packed up and left for their return journey to Nazareth straight after the birth. Would you want to sit on a donkey for several hours straight after having a baby?

My three kings are still making their way around the living room, drawing ever closer to the nativity scene my nan knitted many years ago. Yes, I'm rather attached to the idea of keeping my nativity scene real.

And how do you think Santa would feel if he'd just spent 24 hours delivering presents to all the children around the world and returned home looking forward to enjoying his Christmas dinner to find Mrs Claus packing the tree away?

On a more practical note, I like to have a bit of extra time to come up with my New Year's resolutions. Trying to come up with achievable goals over the Christmas period adds another layer of stress to what is usually an incredibly busy time of year. Plus, it means I don't start mine until 7th January - which gives me a week to watch everyone peak too soon at their attempts to better themselves.

It's also useful to have an extra week to finish off the chocolates, wine and other goodies before knuckling down to the obligatory January healthy eating.

Having spent four weeks through advent preparing for the anniversary of the birth of Jesus, it seems a shame to cut the festivities down to just a couple of days when you can stretch out the celebrations for nearly a fortnight.

So who's with me? Let's sing along to "We Three Kings" and celebrate Christmas for the full 12 days.

When do you take down your Christmas decorations?